I have to admit, Brooklyn was not an area I visited often when I lived in NY. Though, in theory, it was a short trip from where I lived, the truth is the traffic was normally a nightmare, and mass transit wasn’t appealing to a person who likes to get in the car and go. So when my sister announced she was getting married in her neighborhood in Brooklyn I decided to take my vacation time to be with family and we booked a night at the Marriott at the Brooklyn Bridge the night before the wedding. 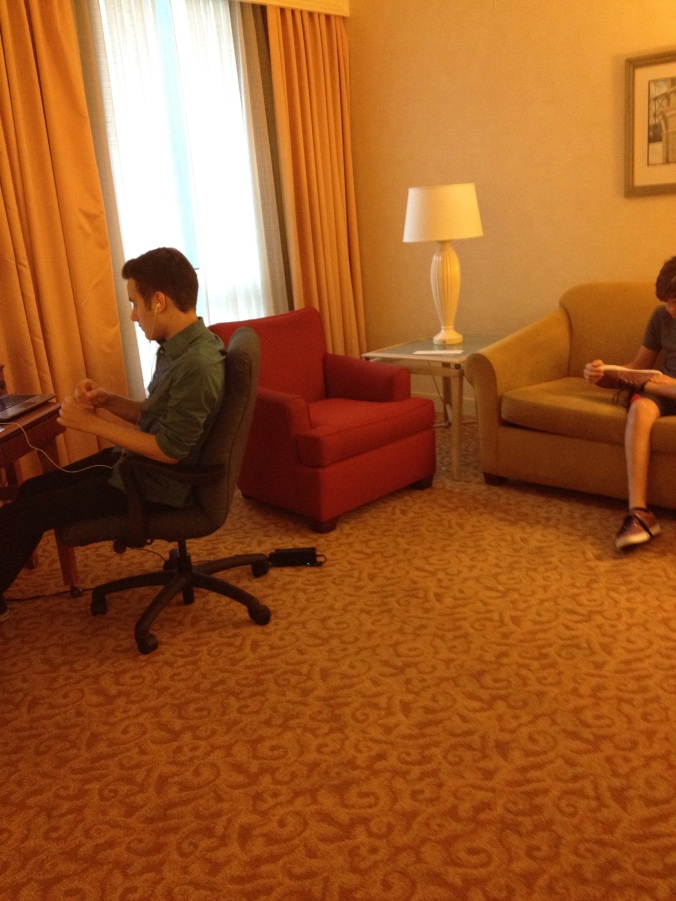 Brooklyn, much like NYC,  is an area in that is growing and evolving. Truth is, when we drove in, I was stunned by the amount of development that had happened since I was last there.  The Barclay Center, which debut was in 2012 , has created an epicenter for new construction, businesses and entertainment. Built where Fort Greene, Prospect Park and park Slope neighborhoods join, I heard many locals grumble that as the neighborhood has expanded, so has the cost of living, pushing out many of the same people that has made Brooklyn the eclectic and artisan haven so many flock to. 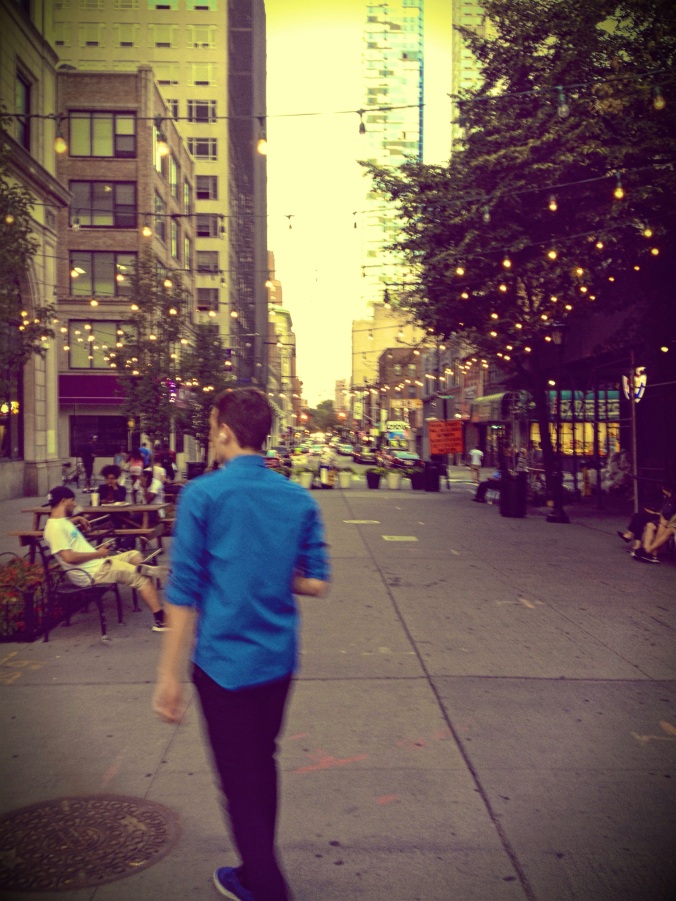 Though I was intrigued by a lot of the great restaurants, it was Friday night. People just getting out of work or coming to the area to start their weekend flocked to the area so we settled on roaming into a Shake Shack that was, by far, the best burgers and fries I’ve had in a while (not to mention the shakes) Even though it was a fast food joint, the urban decor with its reclaimed wood accents and huge windows opening up to the busy streets, added to the “hey, I’m in Brooklyn” experience. 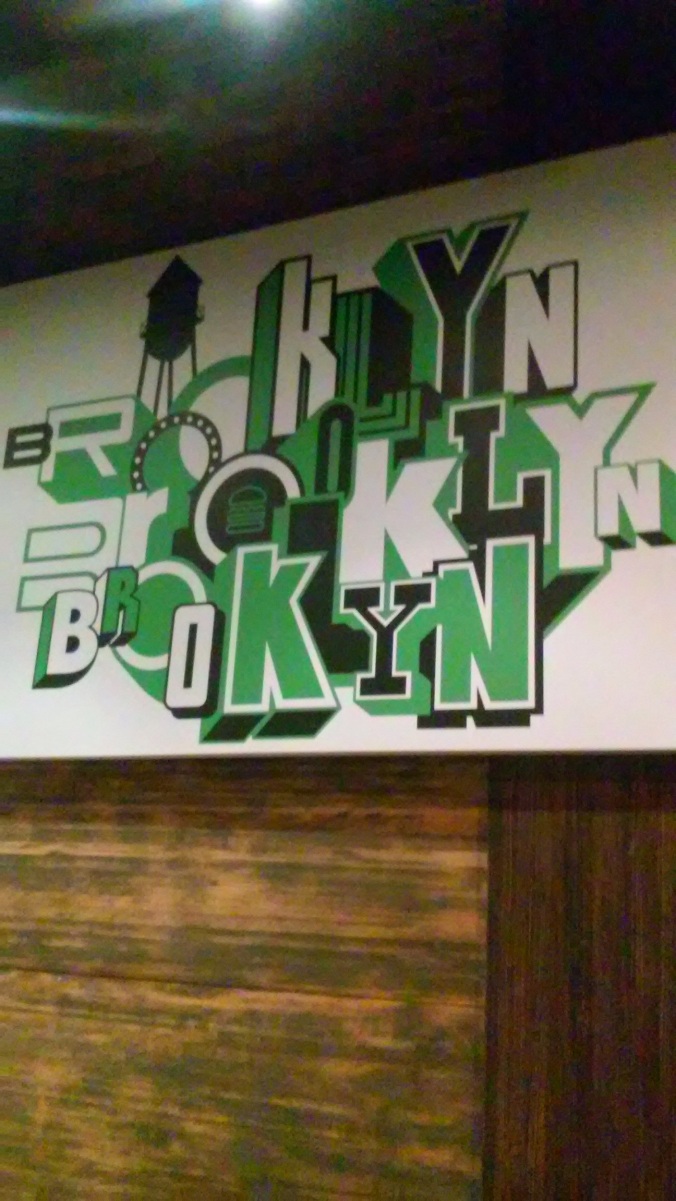 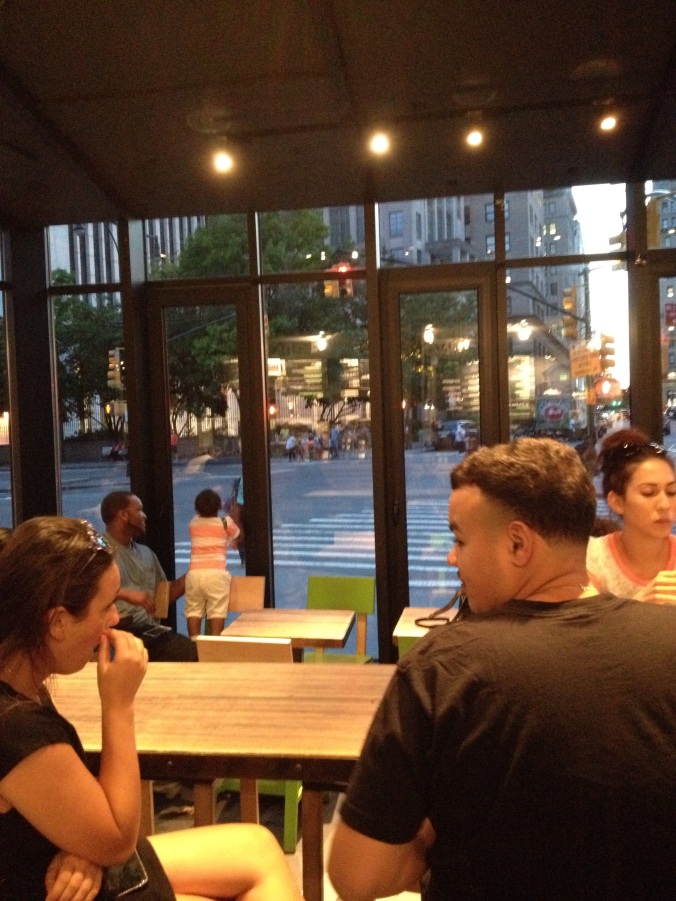 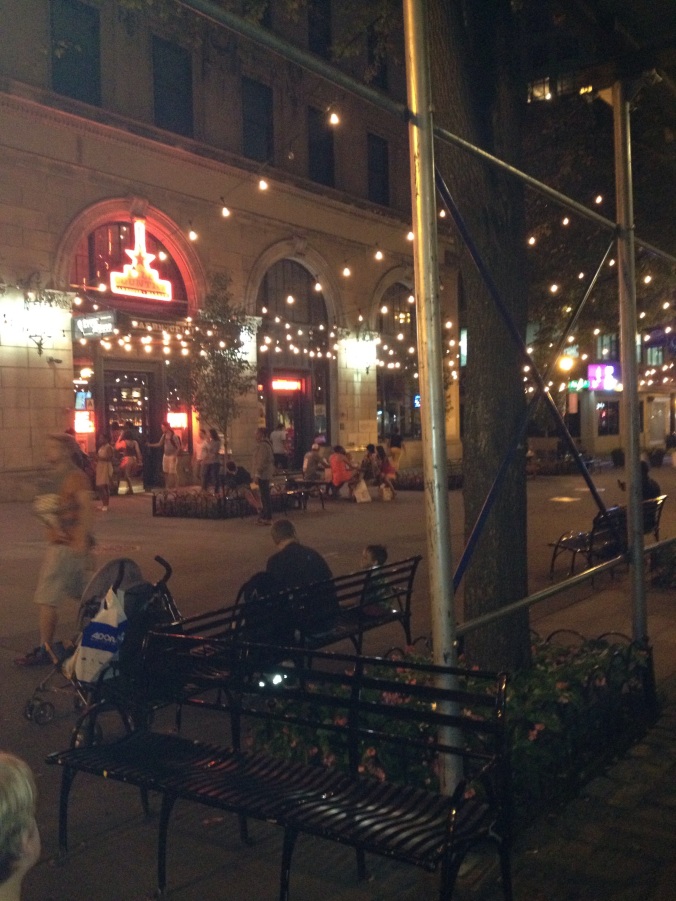 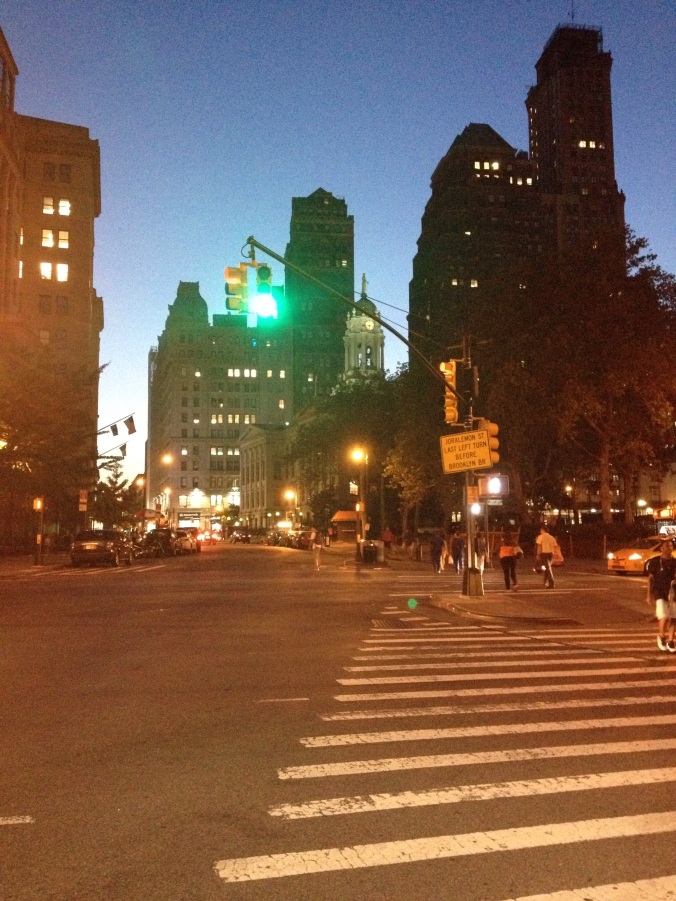 After finishing the night drinking a couple of Berry Mojitos at the hotel bar we called it a night. The wedding was taking place at 9am at the Brooklyn Botanical Gardens and a trolley would be picking us up at 8:15am (have mercy!)

Being a hairstylist, there was no way I wasn’t going to do the bridal party’s hair so I recruited my dearest friend and partner-in-crime, Ramon Montalvo. 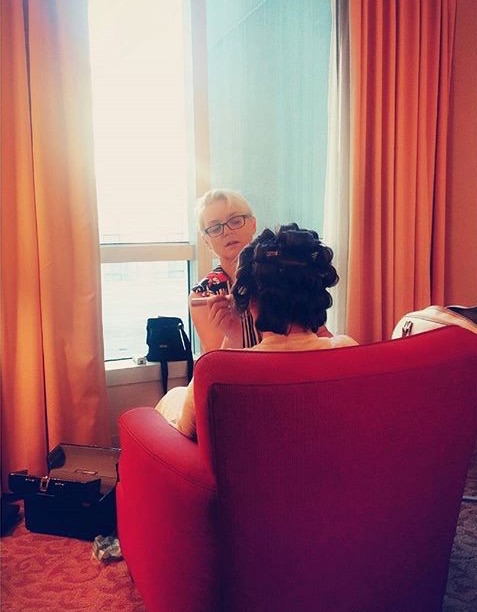 Thank God he made himself available (and was my date for the affair) because not only is he a brilliant hairstylist but a perfectionist that was quick to dive in and adjust my sister’s hair throughout the event, leaving me to marinate in the joy of the event. 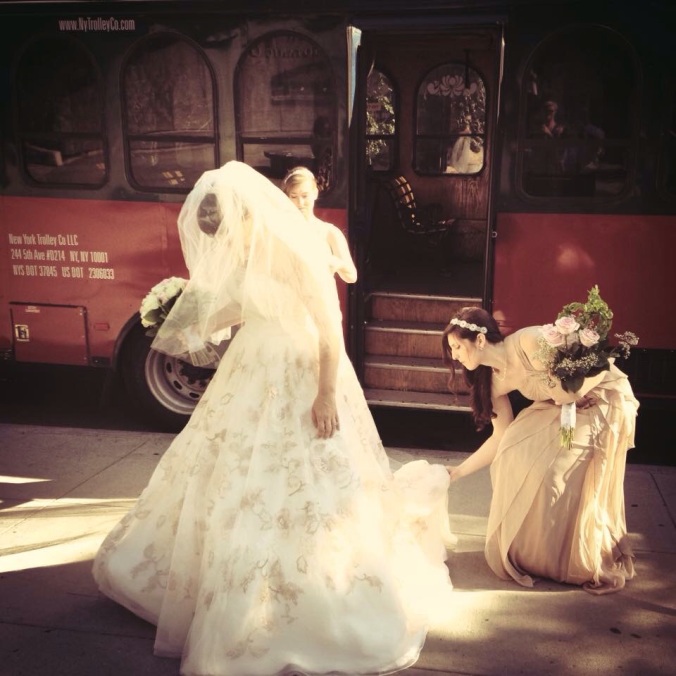 With the temperature a cool 75 degrees, the guests walked through the beautiful gardens and marveled at the  breath-taking venue. There was a feeling that we were the only ones roaming about even though it’s in the heart of Brooklyn. 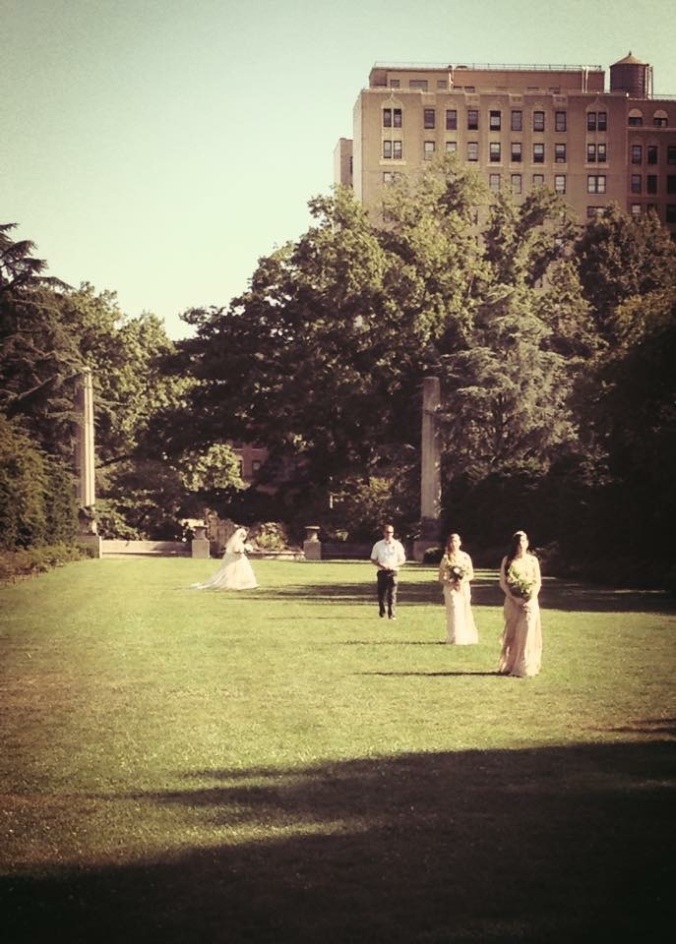 Their ceremony and vows perfectly reflected their union.  Heartfelt, refreshingly unique and enough quirky elements that made you feel like you were on an adventure. How many weddings have all that? 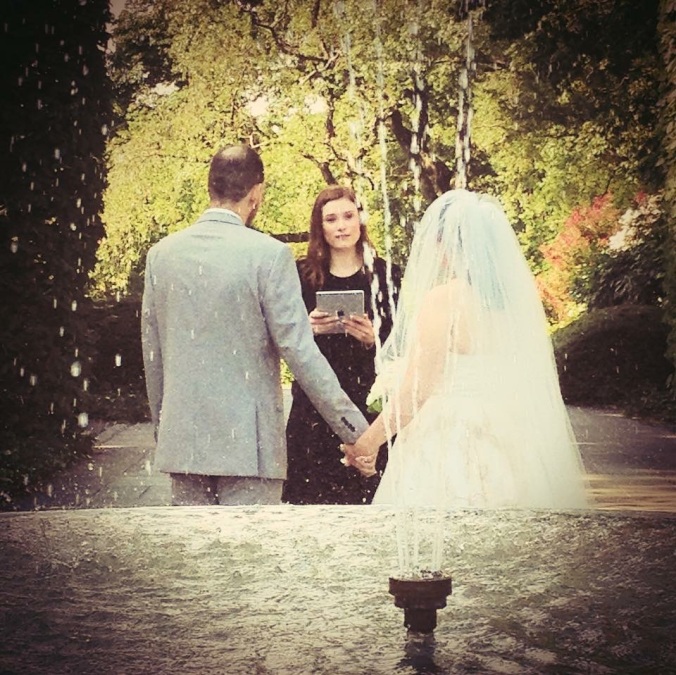 After the ceremony we all boarded a trolley, passing local landmarks like the Brooklyn Flea (oh, if I only had more time!) and arrived at a lovely French cafe, Chez Oskar.

As we entered, the string quartet played Bittersweet Symphony by Verve, my ALL TIME favorite song. 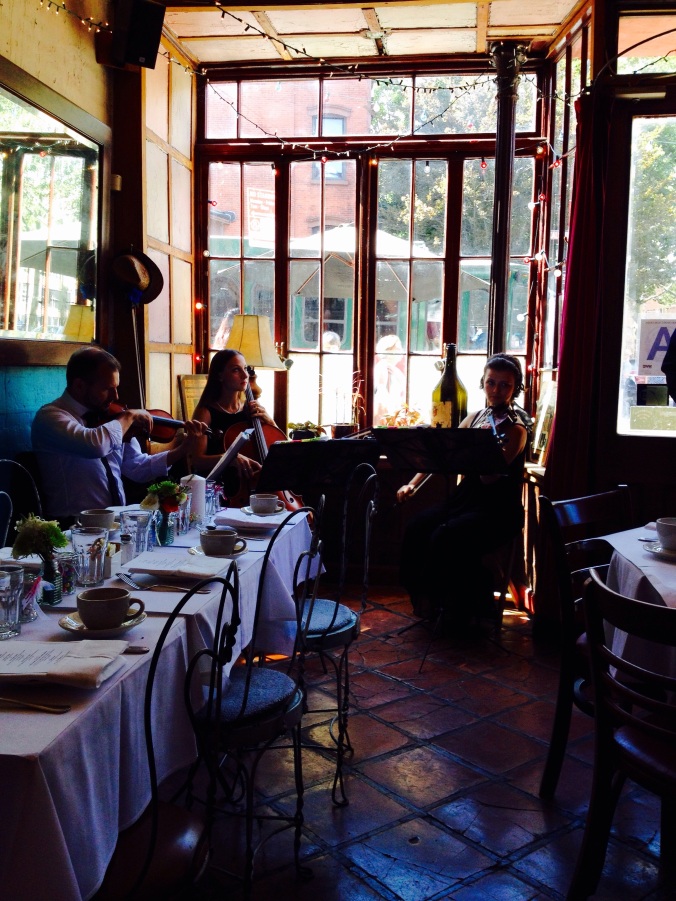 The food, the music, the great conversation and the bustling neighborhood made for a brilliant morning. 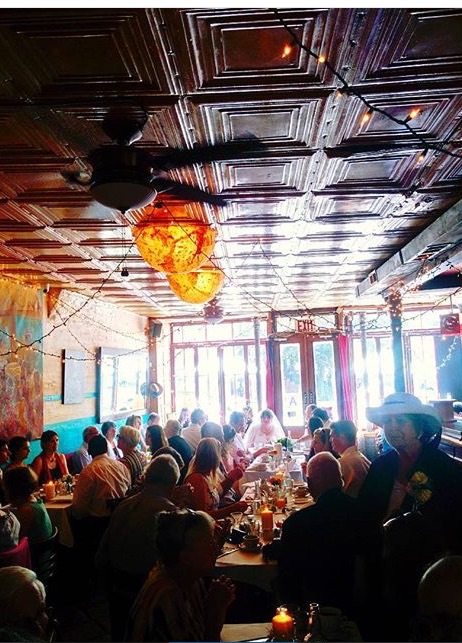 Though we had to quickly depart after the reception was over (had to pick up my son), rumor has it the bride and groom walked home in their bridal attire to change for their honeymoon. As they walked through the streets, locals clapped and cheered the newly weds and the bride, realizing she never threw her bouquet, threw it into a crowded sidewalk cafe as onlookers cheered on.

….and they lived happily ever after. 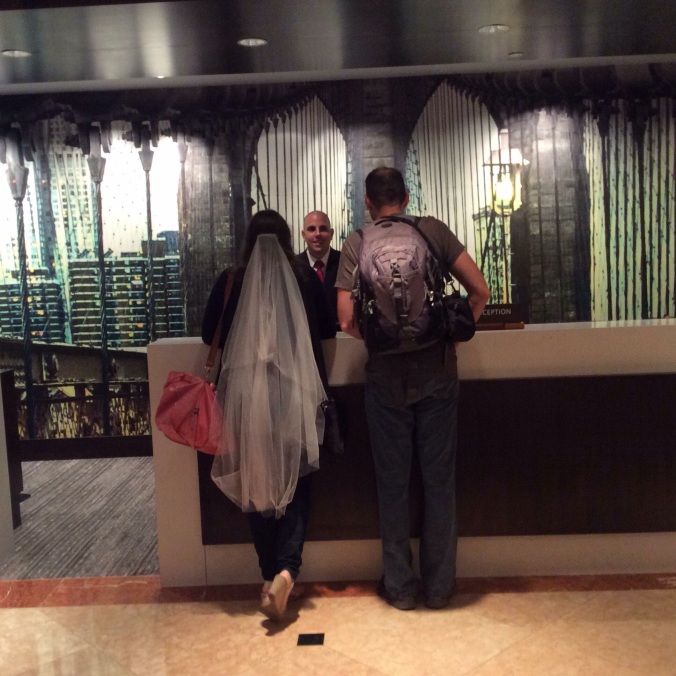